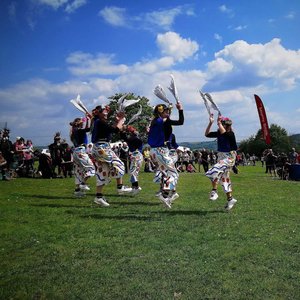 Boss Morris is an all female Morris Dancing side that sprang up out of the five valleys of Stroud, Gloucestershire in 2015. The twelve-strong group of dancers now regularly hops and performs across the UK with their unique take on the traditional English Folk dance.

Boss Morris is an eclectic group of professional performers, dancers, musicians, artists and a horde of magical beasts who create tailored performances for vibrant and exciting events. Boss is well known by folk and artistic communities alike, with audiences and fans from far and wide.

Miserden Morris was established in October 2016 by a few members of the Gloucestershire Morris Men and some enthusiastic new recruits! This side is a mixed side, meaning that we have male and female dancers. We dance in the Cotswold tradition with dances from Gloucestershire, we do stick dances, hanky dances and corner dances!

Nancy Butterfly were formed in 1980. We dance in the North-West Morris tradition. This is a style which is both exuberant, energetic and keeps you fit! Amongst the many things which distinguish it from the other Morris traditions are the distinctive clogs which can be seen and heard during our performances.
We dance at Folk Festivals and welcome bookings to dance at local events, pubs, and inns. Pigsty Morris are a dance group based in Bishopston, Bristol, UK. Our dances are lively and energetic, designed to entertain and attract today’s audiences, but with their roots in traditional English Morris dancing. We dance regularly in the Bristol area, but also perform at venues around the country and further afield.

The Tattered Court are, a mixed border Morris side based in Cheltenham, formed in 2016. We are very much at the modern end of the Border Morris spectrum and like to write our own dances which are fun to dance and awesome to watch. 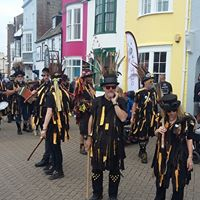 Tatters and Tails – In 2012 friends from across Bristol, Bath and Wiltshire talked about starting a border team. A few months later, after a slow start, 5 dancers and an Iphone as our band we ’borrowed’ some musicians ready to don our tatter tail coats for our first dance out at Chippenham folk festival. We now dance at pubs across the south west throughout the summer, have performed for fete’s and charity fund raisers, as well as Folk Festivals and Morris gatherings. 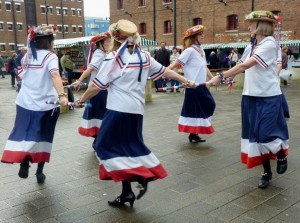 England’s Glory Morris were formed in 1972, first dancing out in 1973 and are therefore one of the longest established ladies morris sides in the world! We are named after the historic brand of matches manufactured in Gloucester for about 100 years by the Morland family. 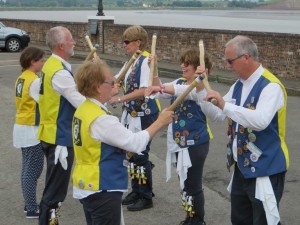 Full Moon Morris are a mixed Cotswold Morris dancing side loosely based around South Wales, UK, although our members come from as far afield as the far west of Swansea, the Forest of Dean and even Devon and Norfolk. Contrary to popular belief, our name is not derived from certain habits of our male members. In fact we take our name from a small hamlet near to Cross Keys in the South Wales valleys. 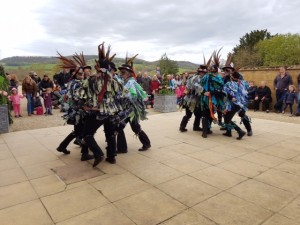 Happenstance Morris is a mixed Border Morris side dancing to live music. We are based in Winchcombe, nestling in the shadow of Cleeve Hill. We meet on Thursday evenings in the winter and at various events in the summer months. Happenstance welcomes both men and women of all ages as dancers and musicianship 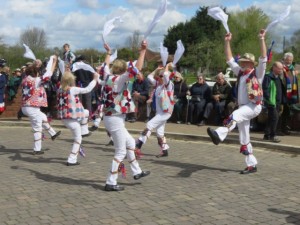 Ragged and Old is a mixed  dance side, formed in 1985 located near Stroud in Gloucestershire, performing newly created dances in the Cotswold style. Our Facebook and Twitter pages contain further information on recent activities. 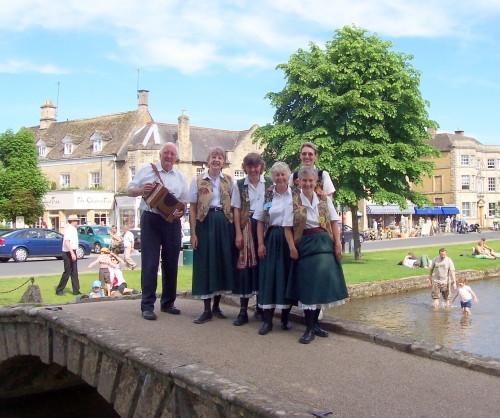 Wimberry Clog are traditional Step Clog Dancers based in the Forest of Dean. Formed in 1979/80. they came about as a result of the wives and friends of the Forest of Dean Morris men wanting to do some form of related traditional dance. By taking the opportunity of clog workshops up and down the country, they began to gather a collection of dances, and to be able to pass them on as the group grew. 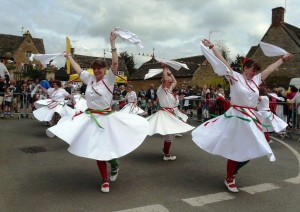 are a side of women dancers who welcome men and women musicians. We have created our own tradition of dances with which we have entertained audiences near and far for over 40 years. We can be recognised by our full white skirts and red and green ribbons. 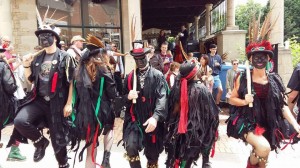 Styx of Stroud is a mixed Border Morris side founded in 2013 to perform traditional and contemporary dances in the Border style. We wear traditional tattercoats, predominantly black, but with flashes of red and green to reflect the felt-making heritage of our home town of Stroud in Gloucestershire. Our faces are blackened to honour the original Border dancers who would blacken their faces with soot as a disguise to avoid prosecution for begging. 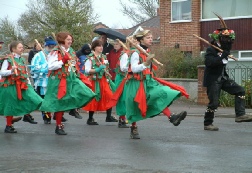 Winterbourn Down Border Morris is a dance side for men and women based just north-east of Bristol, performing mainly self-penned dances in the Border  style. Summer evenings see us out and about, dancing at local pubs.

The Knights of King Ina www.koki.org.uk

Knights of King Ina are a Morris dance team specialising in the Solo and Duet dances known as Jigs in the Morris genre. The dances are drawn from many of the morris traditions and include dances choreographed by us using the styles and steps collected in the early 20th century. These dances were typically seen as competition or show off dances and only danced by those considered to be the best dancers in a team or side.

Malmesbury Morris was formed in the summer of 2004 to provide a local Morris Dancing group for the Malmesbury area. Despite the fact that morris dancing in Malmesbury can be traced back to at least 1641, the tradition did not survive the Industrial Revolution. Previously called called Malmesbury Mixed Morris we decided to change our name to Malmesbury Morris in September 2005   We perform mainly Cotswold and Border style dances both traditional and modern. 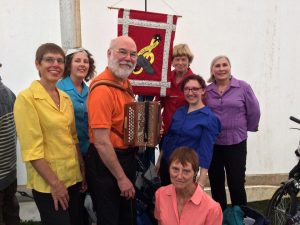 Sabotage Clog is a group of clog dancers who meet in Cirencester and perform dances from England and further afield accompanied by live folk music. We are available to dance at events such as village fetes, folk festivals, weddings etc.